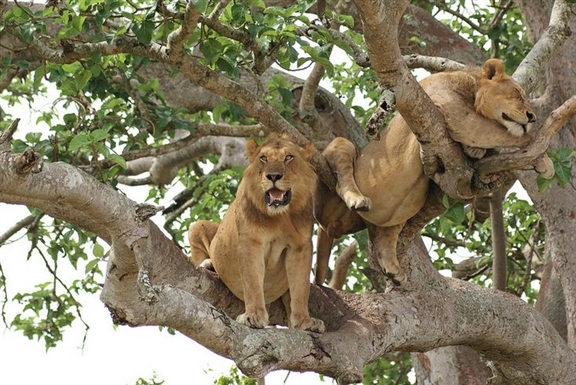 These are a popular attraction to visit in Queen Elizabeth National Park while on your dream tour in Uganda. Uganda “The Pearl of Africa” is located in the Eastern part of the African Continent with this national park commonly known for the Tree Climbing Lions located in the South Western part of Uganda.

Queen Elizabeth National Park is one of the top destinations to visit in Uganda for Wildlife Safaris located far south west of Uganda spanning the districts of Kasese, Kamwenge, Rubirizi, and Rukungiri. This park is approximately 400 kilometres by road south-west of Kampala which is Uganda’s capital and largest city. The town of Kasese is just outside the northeastern edge of the park, while the town of Rubirizi is just outside the park’s southeastern boundaries.

These Tree Climbing Lions in Queen are un exceptional attractions while in Queen Elizabeth National Park as there are rarely seen in other National Parks, it is believed that these primates climb Trees to escape from burning Sunshine on the ground, they are lazily seen lying on the tree branches while digesting their food after feeding, they also climb the trees with interest of escaping from their enemies, they also like it lying in the tree branches and gaze at other feeding primates on the ground like Kobs, Elephants, Buffaloes and more.

These  Tree Climbing Lions are always sighted while on a game drive in the Ishasha sector and never risk moving on the ground because there are more dangerous to human beings therefore if they tend to attack you there is no any way you can escape from them if you don’t have a safari jeep, although these Lions are mostly seen in the tree branches but some usually dwell on the ground and they tend to hide in bush targeting for what to eat like prey (cats, kobs, Impala, Buffaloes, Wildebeests, human beings  and more) since these Lions are predators.

How to Book a Budget Kenya Safari